The store will not work correctly in the case when cookies are disabled.
C-Market: $1.76 USD 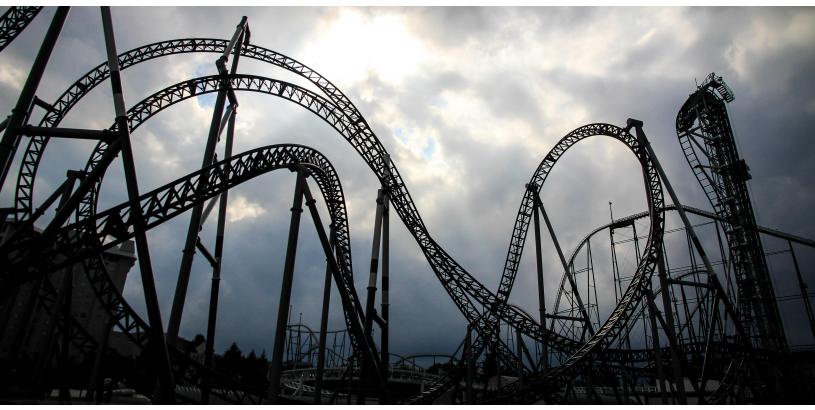 Posted in: Journeys, Stories
By Mike Ferguson
More from this author

"The truth is, current prices aren’t high, recent prices were just abnormally low, a somewhat unhelpful observation if you started buying green coffee after 2015 and acclimated to an average C-Market price of $1.21. Nevertheless, coffee roasters need to do something they’re generally not good at doing, especially in the wholesale specialty sector where relationships are such a critical element of doing business. Raise prices."

On Thursday July 17, 1975, something unusual happened, something virtually unprecedented at the time. It started snowing in southeastern Brazil. After two days, the coffee farms in Parana and Sao Paulo were dusted with snow that destroyed one and a half billion trees. Billion.

On that day, arabica coffee was trading on the C-Market in New York at 57 cents a pound, around $3.00 in today’s dollars. Prices had been low all year, in the 45-55 cent range rather than the 60-75 cent range of the previous two years. So, when the market closed at 61 cents the following Monday, there would have been little cause for concern among roasters. As for the weather in Brazil, unlike today it took time for news to spread and be absorbed. And anyway, coffee traders and roasters had long been conditioned to treat weather news from Brazil like Chicken Little. They would wait and see for themselves if the sky was actually falling.

It took a week for the first chunks of firmament to start hitting the ground. On Monday July 29th coffee traded above 80 cents, something roasters and traders hadn't seen for several years.

Reports that almost half the coffee trees in Brazil were destroyed by a severe frost last month were received here at the time with some skepticism. But by last week one thing was clear—coffee prices are going up sharply.

Although the industry would have time to acclimate as coffee traded at 80-85 cents for the remainder of the year, 1976 would see roasters clamoring for oxygen. Prices topped 90 cents in January and by March the unthinkable was happening. Coffee was trading above $1.00 ($4.86 today) where it would remain, apart from a handful of anomalous days, for 13 years, until the collapse of the International Coffee Agreement (ICA) in July of 1989, a non-weather event that caused prices to languish below $1.00 for five years.

On April 5th, 1976, coffee was trading at $1.14, twice the price on the day snow fell in Brazil nine month earlier. (Coincidentally, perhaps, as of this writing, coffee is trading at twice the price of nine months ago.) As the 1976 holiday season arrived a flabbergasted industry found itself doing business above two dollars.

And it wasn’t over.

Prices continued to climb as the impact on supply from the 1975 weather event in Brazil moved from anticipation to realization. In April 1977 everyone was introduced to the word “quintupling” as the C-Market price for green coffee hit $3.36 a pound, the equivalent of $15.34 in today’s dollars and almost six times the price of coffee on the day half the coffee trees in Brazil turned black two years earlier.

When the snow and frost hit in mid-July 1975, two-thirds of the crop had already been harvested and what remained were mostly mature cherries that could still be picked and processed. This, combined with the fact that the U.S. industry had stockpiled coffee in 1974 in anticipation of a longshoremen’s strike that never materialized, delayed dramatic and sudden jumps in prices until the cupboards where actually found bare and tight supply was no longer theoretical. Brazil was also holding an estimated 21 million bags in 1975, so it took most of 1976 for prices to go from $1.00 to $2.00, but only three months to hit $3.00 in 1977. 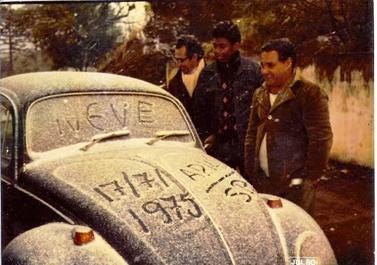 Then, as today, weather in Brazil was not the only thing impacting prices.

For most people, even inside the coffee industry, Angola doesn’t come to mind as a coffee growing country. The country currently produces less than 200,000 bags. But in the early 1970’s, Angola was among the largest coffee growers in the world, producing 4 million bags annually. Fatefully, a devastating civil war broke out in Angola at nearly the same moment the cold weather hit Brazil. Coffee production dropped by 3 million bags almost immediately as coffee growers with European ancestry fled the country. Exports of Angolan coffee would soon drop by a startling 97%.

Add to this a civil war and drought in Ethiopia, an increasingly violent and chaotic dictatorship in Uganda, a dock workers strike in Kenya, an earthquake in Guatemala, flooding in Colombia, and coffee rust disease in Nicaragua. Not only was the stage set for prices to rise based on the principles of supply and demand, but the volatility attracted speculators who only fanned the flames. The coffee world was hit by more than a perfect storm. It was a perfect cataclysm.

The dominoes were falling along with the sky. Just a few months after the frost, and intermittently as prices marched toward $3.00, exporters would stop exporting, waiting for prices to go even higher, origin countries would increase their minimum export prices when coffee was exported, and the large national coffee roasters who dominated the marketplace started increasing their prices.

In March of 1977, one of the top three U.S. coffee brands increased the price of one pound of ground coffee to $4.18, or $19.00 when adjusted for inflation. To the specialty coffee ear today, $19.00 is not shocking, but consumers in 1977 went bonkers. Congress held hearings. William Safire wrote an editorial (“Brazil’s Coffee Rip-Off”). Boycotts were declared. Coffee drinkers started eyeing tea. Left-over coffee went into the refrigerator. People even started re-brewing through spent grounds. Keep in mind that in 1970 a pound of ground coffee had cost less than a dollar. No wonder Americans were reaching for their pitchforks. Today, 16 oz of that same U.S. coffee brand will set you back maybe $6.00, a price expectation that would amount to just $1.30 in 1977. In other words, coffee cost 90% more than consumers would have reasonably anticipated under normal circumstances. Sticker shock is an understatement.

Strange, yes, but unlike the snow in Brazil, not unprecedented apart from the severity. This is coffee. This is the business as it has been for as long as coffee has been commercially cultivated for trade. In 1789, before the abolition of slavery in the Caribbean, the largest coffee producing region in the world at the time, green coffee traded for 10 cents a pound ($3.14 today). Coffee production in the West Indies dwindled, and by 1809 green coffee traded in Amsterdam at 45 cents ($10 today). Then, new wars started and old wars escalated across the globe, making shipping a challenge, and the price of green coffee more than doubled. In 1812 green coffee was trading in Amsterdam for $1.08 a pound ($22 today). Demand far outpaced supply at that time, when production out in the Caribbean “West Indies” was falling and Brazil was barely a blip on the coffee growing radar, producing less than 30,000 bags.

Coffee prices were relatively high throughout the 1870’s. In 1880, Java traded for 25 cents a pound green ($6.78). But as is always the case, high prices create coffee farmers. In 1881, over-production forced the price of Java down to 16 cents ($4.34). This particular shift caused several companies with large positions into bankruptcy and was the impetus for the formation of the New York Coffee Exchange.

When bubonic plague struck Brazil in 1899 all cargo ships from Brazil were put under quarantine as they arrived at U.S. ports and green coffee prices doubled from 4 cents ($1.33) to 8 cents ($2.67), then back down to 5 cents ($1.67) when the quarantine was lifted.

Beyond over-emphasizing the fact that, for a variety of reasons, coffee prices can be volatile, these examples from history also show us that in recent decades, green coffee has been relatively inexpensive. Even with the C-Market well above $2.00 at writing, today’s green coffee prices are historically low when we adjust for inflation.

There have been almost 8,000 trading days over the last 30 years, during which coffee has traded above the psychological barrier of $2.00 only 7% of the time. Coffee has traded below $1.00, at times below the cost of production in many places, 31% of the time. For every day that the market has closed over $2.50, there is a day it closed under 50 cents (147 days versus 168 days respectively). Coffee prices hit $3.00 or higher for a total of just 3 days over the last 30 years.

Adjusting for inflation and setting aside the coffee price crisis of 2000-2004, the five years from 2015 to 2020 saw arguably the lowest sustained green coffee prices in history. Indeed, prior to the collapse of the ICA in 1989, prices above $3.00 in today’s dollars was normal. Even prior to the Black Frost of 1975, green coffee traded at an average of 67 cents, or $3.79 today.

The truth is, current prices aren’t high, recent prices were just abnormally low, a somewhat unhelpful observation if you started buying green coffee after 2015 and acclimated to an average C-Market price of $1.21. Nevertheless, hope is not a strategy and waiting for prices to go back down is the wrong move if coffee roasting is more than a hobby or “side gig.”

The list of circumstances potentially working directly or indirectly against a significant drop in green coffee prices may not be as dramatic as it was in 1977—nor was this year’s frost in Brazil anywhere near as serious—but the list is not insubstantial.

Of course, predicting market shifts is like predicting the weather. No matter how often we might get it right, everyone gets rained on now and then. Nevertheless, coffee roasters need to do something they’re generally not good at doing, especially in the wholesale specialty sector where relationships are such a critical element of doing business. Raise prices. 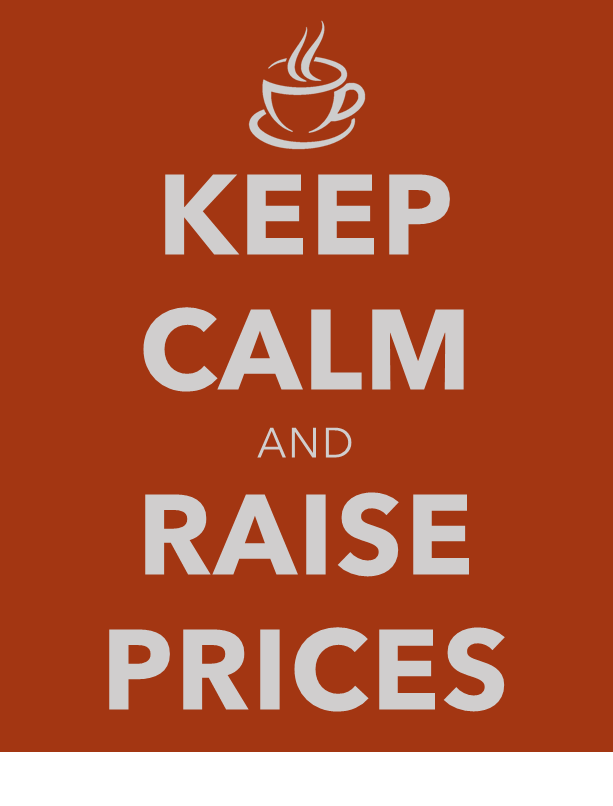 Coffee is an agricultural product, after all, and although it can usually be found among the center aisles in a grocery store, it belongs on the perimeter along with produce, meat, and dairy products. Week-to-week, consumers should be as uncertain about the prices they’ll find on the coffee aisle as they are about the price of milk or ribeye or avocadoes. As roasters, we’ve not done coffee drinkers any favors by shielding them from fluctuations in prices by waiting too long to raise prices.