To mark the second anniversary of Erna's passing, the following from 2018.

Erna passed away recently at the age of 96. She takes with her an infectious joy and a great and elegant guffaw that told you everything was silly and sacred at the same time.

Born in 1921 in the town of Bodø, above the arctic circle in Norway, Erna moved with her family to New York city in 1926. Her father had gone before them and found work as a carpenter in the shipyards. They moved to escape an economic downturn in Northern Europe and arrived in America just in time for the depression. Her childhood was spent in Brooklyn and Queens. She had never seen an apple until arriving in America. She has said her family lived among Italian immigrants and they had never seen red sauce until coming to America. She said the aromas of their neighbors cooking all around them in the tenement building were heavenly and she fell in love with Italian food. Erna speculated that this might be why all three of her husbands were Italian.

Another aroma Erna recalled from her childhood was the smell of fresh ground coffee. Even though they were poor, her mother bought good coffee because they were used to drinking good coffee in Norway. She would buy the coffee whole bean and grind it at home very early each morning so her husband could have coffee before leaving for work at 5:00 am.

Want to explore coffee from around the world?

By age 18, Erna had married her boyfriend because, she said, it was the only way for a girl to get out of the house in those days. Although she hadn’t finished high school, she could type and take shorthand. The day after her wedding she took a job in a bank and began her first career, 30-years as a secretary for a string of companies. She said she enjoyed the work, liked typing and taking shorthand, but absolutely loathed having to type from a dictation recorder. And she hated the way women were treated in the workplace.

In the 1950’s she moved to San Francisco and worked as a secretary at a law firm for several years before going to work at the American Molasses Company, where she was secretary to the Vice President of Coffee. Although the work interested her, and she was intrigued by the process of cupping coffee, there was nothing interesting about the coffee itself. She said they were only selling coffee to the largest roasters in the country.

In 1968, Erna took a job just a block away as secretary for Bert Fulmer (of the “coffee Fulmers”) at B.C. Ireland, an old-line coffee brokerage in San Francisco. Founded in 1885, they were originally importers (or, to be precise, “Importers’ Brokers”) of “Spices, Seeds, Tapiocas, Peanuts, Herbs, Rice and All Oriental Merchandise.”

The job title, "executive assistant," was not really used back then but it's clear Erna's skills had taken her beyond any definition of secretary. One of Erna’s responsibilities was maintaining the position book, tracking the coffee as it came and went. Over time, Erna recognized there was an opportunity to sell small lots of coffee, lots that could not fill a container, to small roasters. The coffee traders at B.C. Ireland were used to counting their sales by containers, and weren’t interested in counting their sales by bags. So, a niche opened up for Erna, working with smaller roasters who were beginning to appear here and there, and some who had been there all along. 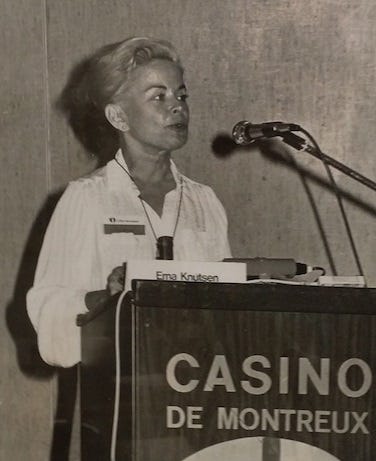 Unfortunately, she was hamstrung in her efforts because the men would not allow a woman in the cupping room. They wouldn’t even allow her to observe coffee being sample roasted. On one occasion, when she was considering the purchase of an entire container of Sumatra Mandheling, she had to wait at her desk in a cubicle with the exporter, while the guys roasted and brewed samples. After tasting the coffee, she told her boss she could sell the entire container in a month … and she did. Mandheling remained one of her favorite coffees for the rest of her life.

Erna was persistent (and it seems Fulmer did not share the prejudices of the other men in the office) and in 1973, the glass door of the cupping room was broken and she got a seat at the table. As she became proficient as a coffee cupper, her reputation among small roasters grew and in 1974 she was interviewed by Tea & Coffee Trade Journal. During the interview, she now famously used the phrase “specialty coffees” to refer to the coffee she sourced and sold.

The label stuck, but it is not so much for the coining of a phrase or even the pioneering a path for women that Erna has been recognized and will be remembered. As important as these things are, Erna’s greatest contribution, arguably, was her willingness to work with small roasters, or the “small trade,” as it was known back then. She recognized that small roasters were working off a very different business model and were willing to pay more for better coffee.

In 1973, when Erna took her seat at the cupping table, coffee consumption in America had hit rock bottom. Americans were drinking almost as much instant coffee as they were brewed coffee because they tasted the same. All over the country, the “small trade” recognized coffee drinkers were interested in better coffee and willing to pay for it, but they were struggling to source the coffees they wanted in the volumes they could take. Erna Knutsen cracked that code.

In 1975 she declared she would buy B.C. Ireland within 10 years (and fire the men). In 1985, as B.C. Ireland celebrated it’s 100-year anniversary, Erna did just that and renamed the company Knutsen Coffee, LTD.

Three years before that, she supported the founding of a new coffee association among coffee roasters (“her” roasters). One of the few things that group agreed on was that the word “specialty” would be part of their name.

The first time I heard Erna’s great laugh was in Philadelphia in the fall of 1998. She greeted me the same way she greeted you if you ever met her, as if you were the single most important person in the world at that moment. The next time I saw Erna was in the spring of 1999 and not only did she remember me and everything we had talked about the last time we met, she knew what I had been doing in the meantime. It was astounding to me because any casual meeting with Erna was accompanied by an unending series of interruptions from people who just wanted to “say hello,” and she seemed to remember personal tidbits about many of those people too.

Erna was fond of saying she owed her success to always smiling. The joy of Erna Knutson was not only infectious but undeniably genuine. Plenty of people will say they love life, but when Erna said it, you knew it was true. Once, when I was about speak with some people about ordering too many drinks and blowing my bosses dinner budget, I felt a hand on my arm. It was Erna.

“Let them play,” she said. “They work hard and they are volunteers and it is not that much money.”

She was right, of course. I don’t know that long life always brings perspective, but a life lived as Erna lived surely must. Her father died just 3 months shy of his 100th birthday, so in 2014, when an interviewer asked her if she was prepared to retire, she answered in the only way Erna Knutsen could.