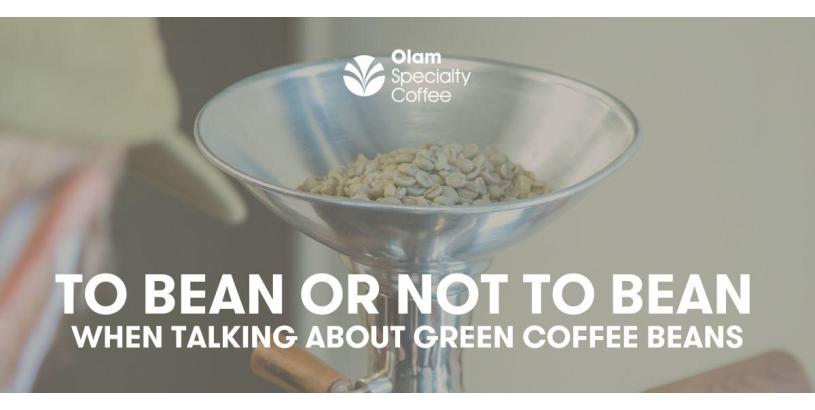 Generally speaking, inside the coffee industry, we don’t use the word “beans” when talking about green coffee beans unless we are talking about specific green coffee beans very specifically and not speaking generally…as it repetitively were. Even if we are being specific, referring to those green coffee beans right over there, we are still more likely to just say “that green coffee” or even, if you are into the whole brevity thing, “that green” works fine. Confusing? Yes, it is, but only when one calls your attention to it and then tries to explain it for some strange reason. So, at the risk of creating even more confusion, let me try to explain it.

For no reason whatsoever—meaning no reason I can readily discover and/or understand—when people who earn their living in the coffee industry are talking about what are, in fact, green coffee beans, we don’t say “green coffee beans” we just say green coffee, as stated already more than once.  Likewise, we just say roasted coffee rather than roasted coffee beans. This is almost always true. If you become part of the coffee industry, this will not be explained to you. It’s just one of those things that one absorbs.

The following is an imperfect analogy but has proven helpful nevertheless: saying “green coffee beans” when we talk about green coffee is a little like Goodyear saying “round tires” when they talk about tires. It’s a thing that need not be mentioned. Tires are round. Coffee is a bean. When a tire is out-of-round, that can and should be noted. When coffee is not a bean, that too can and should be noted as “ground” coffee.

It seems likely to me that our herd usage of green coffee rather than green coffee beans is the result of some instinctual linguistic imperative related to referencing individual things that are only meaningful or relevant or useful in the aggregate. I don’t know. I’m only guessing, but I feel like linguists probably have an explanation that we all could use as a sleep aid.  What I do know is when you say something like “I’m interested in buying green coffee beans,” it doesn’t exactly sit right inside the experienced coffee ear. It’s not how coffee professionals talk; however, it is how coffee consumers talk.

Again, I can only guess as to why.

It wasn’t that long ago that we as coffee drinkers used the word beans not only as a practical point of differentiation (no, not ground coffee, thank you) but as a badge of our coffee consuming sophistication. We were so annoying.

“I grind my own coffee beans at home. You don’t?”

Using bean in a retail/consumer setting is still a thing. The word bean appears right there on the package. And so it goes that when a coffee drinker begins the journey toward becoming a coffee worker of one sort or another they might carry the word bean along with them for a time. This out-of-placeness is most apparent in the context of green coffee where, as has been belabored above, nobody says green coffee beans since most people in the green coffee business (a.k.a. greenies) have been at it for a long while.

However, also, and on the other hand, if you type “green coffee beans” into everyone’s favorite search engine (using quotes), you’ll receive 2.5 million results. As search terms go, it’s a popular one for those who are thinking they might one day sooner or later want to purchase green coffee (beans), more often than not to then roast those green coffee beans. It actually makes sense that those who are just beginning to explore the world of green coffee would use the word beans and, indeed, you’ll notice that your search results for green coffee beans are mostly business-to-consumer type website aimed at people who want to roast coffee at home for themselves and maybe a few friends (for starters), those for whom using the word “bean” still seems like the thing to do because that is how they have talked about coffee up to that point.

Does it matter? Not really. Call them green coffee beans if needs must. What’s the point? Ah, I direct your attention to the subtitle of this essay.