Laos Coffee and the Lord of Naga 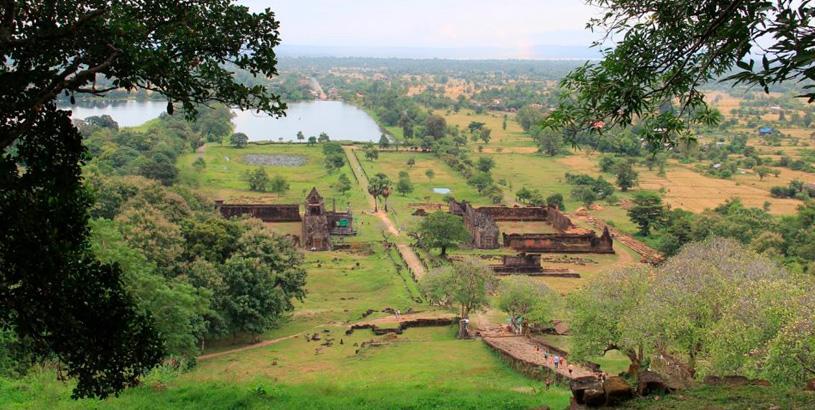 Laos Coffee and the Lord of Naga

The story of Laos coffee starts in the southwest corner of Laos, where the Mekong river approaches the border with Cambodia as if approaching an ocean, fanning out into so many delta-like fingers that the region is called Si Phan Don, Four Thousand Islands. A hundred miles north, after hugging the border with Thailand for 500 miles, the Mekong—whose name derives from Mae Nam Khong, Mother of All Rivers—breaks with the boundary between the two countries to meet up with the smaller Xe Don river at the city of Paske, capital of the Champasak province. This stretch of the Mekong marks the western edge and southwestern corner of Champasak, the Bolaven Plateau, and the coffee lands of Laos.

Although the mythical creature, the “Naga,” appears in many cultures and traditions, it is particularly prevalent in Laos and Thailand, where it is known as the “Phaya Naga,” Lord of the Naga, and is believed to live in the Mekong river. Unlike the Naga that appear in some other traditions, the Phaya Naga is not partially human, and is characterized by a giant horn on its head. Like “Nessy” in Scotland’s Loch Ness, the Naga is regularly sighted in the Mekong. In fact, in addition to a giant catfish, there is a species of eel in the Mekong that grows to 5 feet in length, sans the horn. Tradition holds that fireballs seen shooting over the world’s 12th longest river at the end of Buddhist Lent, known as Mekong Lights or Naga Fireballs, come from the mouths of Naga. 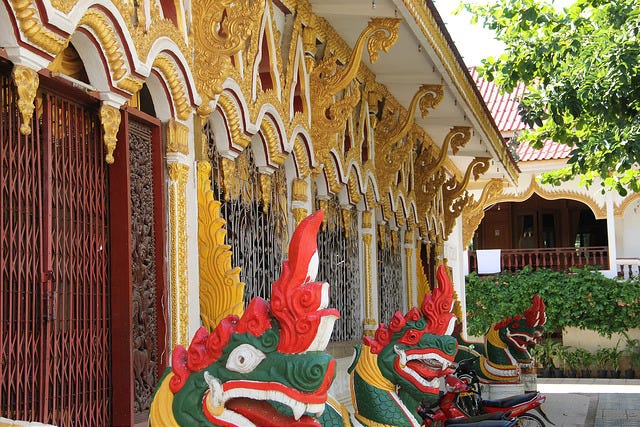 Naga are incorporated in the exterior architecture of this building in Laos.

If reshaped it into a rectangle, Laos would be just a little smaller than Oregon; and yet, inside this collection of 92,000 square miles there are 160 ethnic sub-groups and 82 distinct living languages (counts do vary). There are 160 cities with over 1,000 people in Oregon. Imagine each of these cities had its own discrete ethnic group collectively speaking 82 different languages in addition to English. Administratively, politically, geographically, there is a Laos. But functionally, at the level of people living on and off the land, Laos is a collection of distinct communities.

For example, at the beginning of the 20th century, the Yahern people (also: Nyaheun) came down from the Annamite mountains, which define the eastern edge of Bolaven Plateau and the border with Vietnam, to discover they were citizens of something called the Kingdom of Champasak, in what is now the Paksong District and the “coffee capital” of Laos. They were granted land by the royal family and for 120 years they farmed this land, including coffee, which was introduced to northern Laos by the French in 1915. Coffee production moved to the Plateau, where the altitude and climate are ideal, in the 1920’s. Today, villages like Nongluang, Lassasin, and Xenamnoi are part of a network of seven villages that make up the Xekatham Estate from which Olam chooses the finest coffees grown in the region. 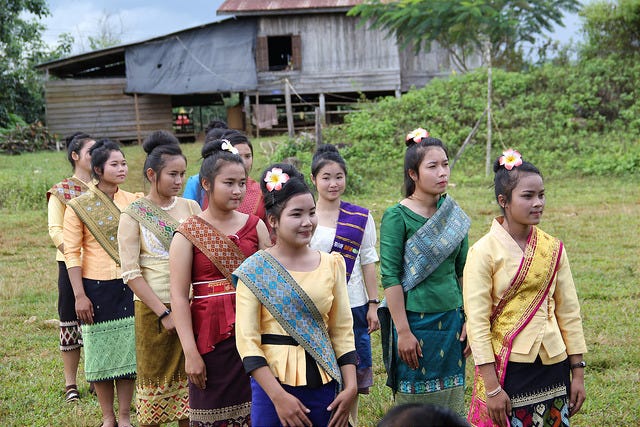 Until the 1970’s, the Yahern, Talieng, Alak, Lawae, La Ngae, Katoo, Laven, and other peoples practiced shifting cultivation, allowing land to recover and cultivating new areas. Unfortunately, this often meant “slash and burn,” destroying forest to create fresh agricultural land. In 1977, the government began to encourage settled farming, through a combination of subsistence and cash crops, including coffee. It took a generation, but farmers on the Plateau adapted to permanent agriculture. Traditional farming practices did not vanish completely, but much of the “slash and burn” was replaced by planting commercial growths like teak and rosewood, and forests were gleaned for commercial products, like bark for incense and pampas grass for making brooms. Over the last two decades, the government has promoted the transition of Laos coffee from Robusta, which was planted in the 1950’s in response to diseases like rust, to Arabica.

The Yahern are only one example of the many communities that now grow Laos coffee, under the watchful eye of the Phaya Naga. Because indigenous communities tend to remain culturally—though not economically—self-contained in rural areas, it can be a challenge to have standardized adoption of agronomic practices. Even for relatively recent crops like coffee, communities develop their own ideas and approaches, not only to farming, but in reaction to the social impacts of expanded permanent agriculture.

Over the last 10 years, quality coffee on the Bolaven Plateau has come to mean more than a change for Laos coffee from Robusta to Arabica. With each passing season, more and more farmers learn about the agronomic and milling practices that produce superior quality worthy of the specialty market.

Our Laos Naga coffee comes from a variety of farms and a variety of people, but they have in common a pursuit of quality as defined by the specialty coffee industry, with help from Olam — and, of course, whatever help they may receive from the “Lord of Naga.”