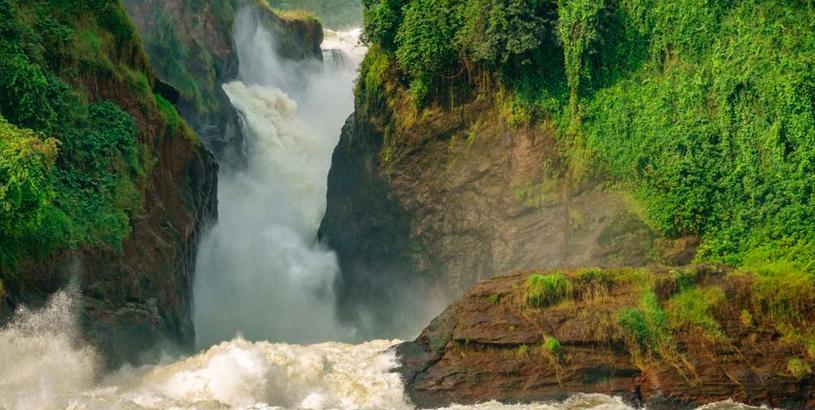 In Uganda, coffee grows exceptionally well — thanks to an ideal climate that includes ample rainfall, rich volcanic soil, plenty of sunshine, and of course, the Nile.

Uganda, Coffee, and the Nile River

If you were a European explorer in Africa in the nineteenth century, at the top of your to-do list would likely be “Find the Source of the Nile.” The river’s looming presence in even the earliest of recorded histories combined with an obsession to measure everything (inherited from if not credited at the time to ancient Greeks and Egyptians) fueled the need to answer the question, “How long is it really?”

Although the source of the Nile is still debated today, it is generally if not specifically identified as another queenly namesake, Lake Victoria. After a brief visit to Lake Kyoga, the water flowing vaguely north from Lake Victoria turns west and is reunited with its prince at Lake Albert. Then, the relatively short river passage known as Victoria Nile ends and a new river flows north, the White Nile. The meeting of the Victoria Nile and the White Nile marks the southern end of a rich and verdant ecosystem above which can be found one of three highland arabica coffee regions in Uganda.  The White Nile flows through plains filled with wildlife on its 1,400-mile journey to Khartoum, Sudan, where it joins the Blue Nile flowing from Ethiopia to become “The” Nile, destined for the Mediterranean Sea.

Past the Murchison Falls, which mark the transition of Victoria Nile to White Nile, and past the wild plains, you enter the West Nile and thick forests begin to thicken as you approach the border with Congo. The West Nile Area is home to the Alur who descend from the Luo tribe, and although the area has been inhabited for thousands of years, much of it still has the feel of virgin territory.

Discover Green Coffees from Around the World

The Alur seek harmony with the environment, living largely on what the land provides. They remain loyal to their traditional customs and beliefs, celebrating events like bumper harvest, the birth of twins, and enthronement of chiefs for local chiefdoms. When twins are conceived, the family will perform a dancing ritual throughout the night to ward off bad luck. Should a chief have several heirs to the throne, a ceremony is carried out in which a bead is cooked in food and served to the children. The child who finds the bead in their serving will be the next chief. A new chief has to live in isolation for three days with his only clothing being sheepskin as part of his initiation to the throne.

All the people of West Nile are dependent on the soil and they take pride in celebrating a good harvest. These community celebrations provide an opportunity for the elderly to interact with the younger generation and pass on knowledge. It also provides an opportunity to apply social pressures to those who are viewed as not working hard enough to contribute to the harvest.

Aside from the formalities, it is also a chance for social interaction as the community will ridicule families that have not put in the work to reap a bumper harvest. The Nebbi White Nile Mill, established in the highlands of northwest Uganda in 2015, was named after the river pushing north through the plains and serves 6,000 farmers in the West Nile and Murchison Falls coffee region. Prior to this, much of the smallholder coffee grown in the region was processed by small crank pulpers and dried on garden mats.

The transition to fully-washed processing at this fully-equipped centralized mill, combined with quality-focused agronomic training for farmers, has increased the quality of Uganda coffee throughout the region dramatically, with cupping scores improving four to 14 points. There has also been a significant effort to attain certifications and most farmers hold multiple marks, including RFA, UTZ, and Organic. The Nebbi Mill is also home to a quality lab and full-time quality controller. The project was developed and is overseen by Kawacom, Uganda Unlimited, and was created with an emphasis on sustainability, which includes more than certifications.

A push for mainstreaming of gender projects in the region has resulted in the beginnings of women gaining greater social status and being included in decision-making. A new self-sustaining Village Savings and Loan Association polls community funds to provide micro-loans for school, land purchases, and construction. The Nebbi Mill also provides clean tap water to the local community at no cost. Through a community nursery, farmers have access not only to coffee seedlings but food crops as well. An additional benefit to the community has been job creation, including mill attendants, nursery workers, inspectors, and field supervisors.

The modern mill was also built with a focus on sustainability and features a volcanic stone wastewater management system, a process for using coffee husks to heat the dryers, water recycling, retractable patio roofing, and low-energy machinery wherever possible. White Nile coffee processed at Nebbi Mill is grown in soft volcanic soil at 1,400 – 1,900 masl and the quality grade is named “White Nile Fully Washed” and includes both SL14 and Catimor.

Olam is proud to sell offerings from Uganda. Coffee from this country is known for its sweet chocolate and earthy flavors, rich texture, and lighter body.